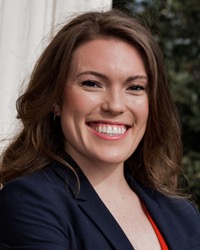 In May 2017, Lauren graduated from Cumberland School of Law, Samford University. While in law school, Lauren participated in numerous negotiation, mediation, and arbitration competition and was a member of the National Trial Advocacy Team. During her time on the Trial Advocacy Team, Lauren, won best closing argument, and participated in numerous mock trials.

Lauren started working at Peeples Law in 2015 as a law clerk, and then was hired on as an Associate Attorney when she passed the bar in October 2017. Lauren is a member of the Alabama State Bar, American Bar Association, Junior League of Birmingham, and Delta Gamma Alumnae Association.

When Lauren is not working, she enjoys traveling, reading, attending spin class, and spending time with her two dogs, Cooper and Rory.

Skip footer and go back to main navigation