Why To Stay Off Of Social Media During A Divorce 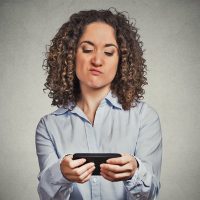 While many people turn to Facebook, Instagram, and other social media sites to vent, celebrate, and share with friends, it can be a significant detriment to do so during a divorce. While you may be tempted to vent about your spouse, celebrate your divorce, change your relationship status, or post photos from your latest vacation, all of these actions can come back to haunt you during a divorce, and the cost usually far outweighs the gratification of likes and comments.

Can Social Media Be Used Against Me During a Divorce?

There are a number of ways that social media can be used against you during a divorce. First of all, anything that you post on social media becomes a matter of public record during your divorce and can be introduced as evidence. In some cases, your posts or social media activity may even allow the other party’s lawyer to subpoena your social media accounts, allowing the court access to even your private messages and DMs.

Most Common Ways Social Media Can Hurt You During a Divorce

There is essentially no limit to the ways that your own posts, words, and actions can be used against you in a divorce. It is helpful to think of everything you post as adding fuel to the other side’s arguments. If you make posts venting about your spouse or complaining about their behavior they can be presented to make you look unstable, or like you have a vendetta against them. If you have shared children, the other side can argue that these posts demonstrate that you do not have an interest in representing the other parent in a favorable light to your children or maintaining a healthy co-parenting relationship moving forward, which the court may consider as a factor in awarding physical custody. If you post and geo-tag photos with your children that are out of state or in violation of an existing custody agreement, it can make you look like a flight risk, or like you cannot be trusted to adhere to the terms of a visitation and custody agreement, which can also weigh in favor of giving primary custody to the other parent. Photos intended to show that you are happy and moving on with your life that may involve partying with friends or drinking alcohol may instead be used to try and show that you are an unfit parent. Posts depicting lavish vacations, new cars, homes, jewelry, or other extravagant purchases can indicate to the court that you are attempting to deplete marital assets to avoid a fair and equitable settlement.

Schedule a Consultation with a Birmingham, Alabama Divorce Lawyer

If you are currently considering or going through a divorce, there are many factors that must be considered. The experienced Birmingham divorce attorneys at Peeples Law are ready to offer comprehensive, compassionate, and zealous support and legal advocacy during this time to help you navigate the divorce process as painlessly and efficiently as possible while protecting your interests. Contact Peeples Law today to schedule a consultation.