Can A Postnuptial Agreement Save Your Marriage? 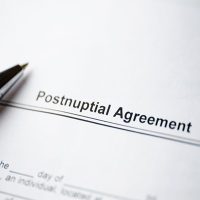 Couples who get married late in life often rewrite their wills to account for the marriage.  If you and your spouse got married before you were old enough to think seriously about your estate plan, signing a postnuptial agreement might help you resolve issues that could lead to probate disputes.  For example, the financial support that you or your spouse provides to children from previous marriages could be a sore spot; when you got married, the children were much younger, and you could not have predicted how long they would need your financial support.  A postnuptial agreement can help you resolve the following issues related to blended families:

Renewing Your Commitment to Your Marriage After a Major Setback

Another situation where many couples sign postnuptial agreements is when they reconcile after a separation.  If conflict over debts caused them to separate, or if one spouse harmed the other financially in the course of an extramarital affair, addiction, or risky business decisions, the postnuptial agreement can protect the wronged spouse from responsibility for those debts, whether or not the couple eventually gets a divorce.

A Birmingham family law attorney can help you draft a postnuptial agreement that could save your marriage, and if it cannot do that, it can at least be legally binding and enforceable in the event of a divorce.  Contact Peeples Law today to schedule a consultation.

By Peeples Law | Posted on August 9, 2022
« Imputed Income And Alabama Family Law Cases
What Happens To Inherited Wealth In A Divorce? »